Well what a ride that was!!

In total I clocked up 207 miles with just over 13 hours in the saddle. When I started to tire, I was motivated to keep going, not only for a personal achievement, but for the two charities Reward Finance Group is supporting this year – Just B Bereavement Support and Reuben’s Retreat.

As for the journey, I set off from Bradley Wiggins’ Gold post box in Chorley, heading to Chris Hoy’s Gold post box in Edinburgh, in the support vehicle, with 21 riders setting off on the journey. The weather did not live up to expectations and I think we had a taste of the Scottish Summer, with heavy downpours and flooded roads for the last 30 miles into Scotland.

A few mechanical problems on the way up made it look like the Tour de France, however the pit stop crew needed a bit more practice in changing wheels after a puncture.

We were almost into Edinburgh when we had another issue with one of the team breaking two spokes on his front wheel. Fortunately, we had a spare bike and he was soon back in the group, thanks to a bit of tailgating behind the support vehicle.

The next day it was my turn in the saddle.

There were seven of us riding back, with three dropping out after 120 miles.

We set off a bit late, at 7.45am on Sunday, and headed South.  It wasn’t the best start as we got lost in Edinburgh. We asked the police for help, which wasn’t the best idea, as they must have thought we were Geordies, as they sent us on the road to Newcastle!

Once we were back on the right route, we quickened up the pace realising it would be midnight before we would be back in Chorley.

The weather conditions were brutal with rain all the way to Penrith with a headwind up Shap.

As we started the descent, after a hard climb over Shap, one rider hit a pothole and his rear mech, which are the two small plastic wheels the chain runs through under the back gears, fell off. Quick thinking found the nearest bike shop who had the spare part. Special thanks go to Wheelbase for the great service for fixing his bike in double quick time.

The ride confirmed that Scotland is truly full of hills. As for the hardest part, it must be cycling from Leadburn to the top of Beef Tubs – a constant climb for 34 miles! 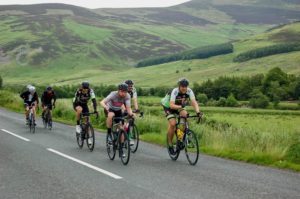 Hats off to the three riders, Luke Davies, Paul Curley and Rob Ashcroft, who rode both ways.

On reflection my challenge was easy, the teams at the charities are the ones who need congratulating for all the hard work they do when supporting those people when they need it most.

Thanks for all your donations, the total raised so far has been amazing. But we still want more so, in case you were thinking of donating, the links are below.

Thank you so much for all your support. 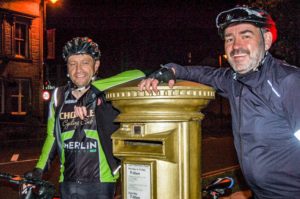